Elizabeth is passionate and dedicated to her full time animal healing work and has been a great pioneer, fundraiser and ambassador of complementary health for animals. Animal guardians are now more passionate about a holistic approach to their companion’s health. Veterinary surgeons and other vet professionals from around the world train with Elizabeth to instil a fuller lifestyle approach to their client’s treatment and wellbeing. The use of plant remedies, nutritional emphasis and emotional balance techniques all complement conventional care.

Elizabeth established her animal training faculty in 2005 where students from all over the world attend lectures, workshops and the Diploma courses. Nestled in the South Downs National Park Sussex, Elizabeth’s busy animal clinic also offers four legged friends and two legged guardians a wonderful opportunity to relax in a tranquil setting.

Elizabeth has been professionally involved in healing for twenty one years and is a member of The Healing Trust, the largest healing organisation in the UK, working with both people and animals. A qualified and insured complementary therapist Elizabeth is a practitioner of zoopharmacognosy, an emerging science which refers to the process by which animals self-medicate by selecting plant material, algae and clays to treat and prevent disease, and is a member of The Ingraham Institute of zoopharmacognosy.

In the UK Elizabeth teaches many aspects of Animal Healing at the College of Psychic Studies and The Harry Edwards Centre.  She runs continued professional development training for the Healing Trust and currently lectures on the equine degree course at Plumpton College, Sussex.

For the last five years Elizabeth has travelled annually to Tokyo, Japan where she teaches animal husbandry skills to students and vets and fund raises for the animal charity ARK. After the Fukishima disaster Elizabeth offered her services to ARK and worked at the sanctuary with Mina, a graduate of the Diploma in Animal Healing. She travels extensively around the world offering her animal healing services to sanctuaries and through the Healing Animals Organisation has collaborated with the RSPCA, Home and Abroad Animal Welfare, ARK, Wild Wings and ACE on specific animal projects to great success.

In 2012 Elizabeth travelled to four continents with her animal work. She was a key speaker at the World Conference of Companion Animal Welfare on complementary health for animals in Greece. She travelled to South Africa to work at an eco friendly conservation wild life park with elephants, lions and other endangered species, and Jane Goodall’s primate sanctuary Chimp Eden where she introduced emotional balance techniques and simple plant remedies to the staff.

In answer to the passion for this work and the demand for more, Elizabeth launched the Diploma in Animal Healing in Johannesburg, South Africa in 2012. Diploma students and graduates are doing tremendous work in rescue centres such as Animals in Distress in Joburg. Also in 2012 Elizabeth travelled with four of her students to Mongolia to work with a nomadic tribe with reindeer and Mongolian horses.

Every year she is invited with her students to work side by side with vets at the animal hospital in Luxor, Egypt offering relaxation techniques and simple herbal remedies to cats, dogs, horses and donkeys.

Her pioneering Animal Healing School is the first to train and register graduates in Diplomas in small animal and equine healing. Her vision is to spread the network of registered animal healers into vet practices and sanctuaries throughout the world expanding complementary healthcare which has become mainstream among humans, into animal care.

Elizabeth travels the UK to see pets and their owners and also sees clients at the clinic and apothecary in Sussex.

Elizabeth has been privileged to work with a menagerie of animals over the years, ranging from horses, dogs, cats, snakes, pigs, to birds of prey, otters, and rabbits. She regularly works with vets, doctors, animal sanctuaries such as Secret World, Equine Horse Watch, and animal charities such as the RSPCA, Celia Hammond Trust, the National Animal Welfare Trust and the Acorn Project. Most recently Elizabeth has set up international animal healing links with animal charities in Egypt, Portugal, Cyprus, Sri Lanka, Southern Ireland, South Africa and Japan.

What Inspired Elizabeth To Become A Healer? 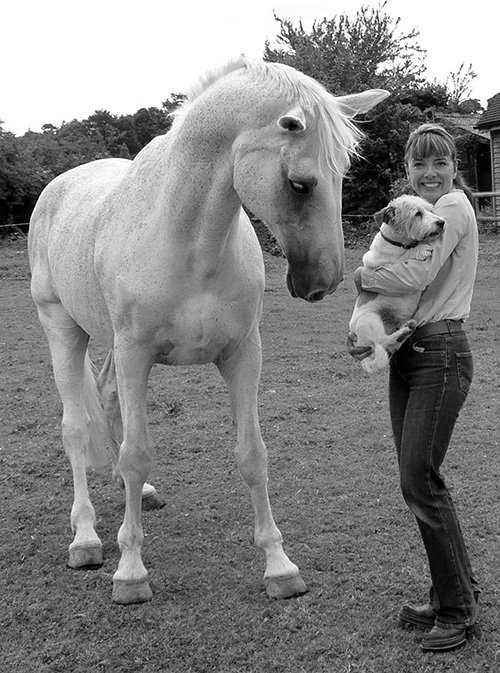 Elizabeth has a special interest in horses, and has been involved with them for over thirty years. She currently has three horses ranging from eight years to twenty seven. Ten years ago Elizabeth’s wonderful horse Wow (on the front cover of The Animal Healer) passed over. He was Elizabeth’s friend, mentor and teacher. For many years Elizabeth competed Wow, a Danish bred Grey gelding with The British Show Jumping Association. In 1994 Wow was involved in a horrific ‘near-death’ accident, breaking his neck in three places and requiring a double arthroscopy in both fetlocks. With very little hope of him surviving and nothing to lose Elizabeth turned to complementary health care. Liz takes up the story;

‘It was a balmy autumn evening and I decided to leave Wow out for the night rugged up in a secure paddock next to our house. In the middle of the night a freak storm rose up. The following morning I found him in shock, his legs and throat cut and bruised and in the wrong paddock.  It was only talking with neighbours that his story unfolded. Frightened during the storm, Wow had jumped the five-foot gate, and headed down the grassy lane, ending up in a neighbour’s swimming pool. Full of water and a canvas cover, Wow fought for his life, laden down with the weight of his own rug. Saturated in water, he scrambled out of the pool and somehow managed to make his way back to his field. The vet was immediately called and could only find minor injuries and shock.  It wasn’t until months later that we discovered Wow had broken his neck in three places. My vets were doing everything they could for Wow, but he deteriorated over a period of eighteen months and seemed to lose the fight for life.

It was at that point that I felt utterly helpless, and upset that I was about to lose my best friend. Wow was emotionally drained and depressed; the only comfort to him seemed to be when I instinctively placed my hands on certain areas of his body. At first he would swing his head round and guide me to areas he wanted me to work on. I began daily sessions with Wow, and he became a happier and more relaxed. 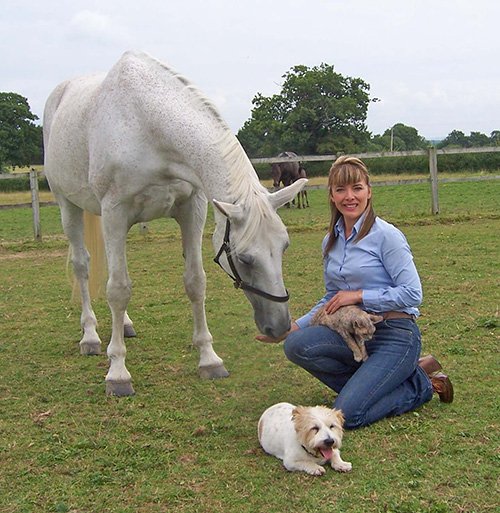 Gradually I began to sense for myself, feeling different sensations in my hands. Sometimes they became hot, tingling and throbbing in the most painful of areas. Sometimes cold, and if you can imagine listening to a low frequency hum, seemed to be vibrating from my hands. As I watched Wow, he would sigh and go would go into a deep-relaxed state, sometimes nod off, rest a back leg and allow his head and neck to drop slightly and relax even further. Some twenty minutes would pass, and it felt right to stop. Wow would sometimes walk away, or I intuitively felt we had done enough. It is always important to listen to your animals, and respect their wishes. At the end of a session Wow always looked me in the eye and I knew he was thanking me. I sensed from Wow  we needed to move home. He was emotionally, mentally and physically traumatised by his horrendous ordeal and I had never felt truly comfortable in that house. We moved to Chealsfield and have never looked back.”

My new equine vet, Andrew Browning, also interested in holistic veterinary medicine suggested osteopathy. We arrived at the clinic for Wow’s consultation, which went superbly well and Wow cheered up enormously after his first treatment with Anthony Pusey. There, I bumped into a lady called Vanessa Leon, who was the catalyst in changing my life for ever and introduced me to healing and Linda Kay, healer, medium and my teacher from the London School of Psychic Studies. I will be forever indebted to these two wonderful women. Read more in my book The Animal Healer

We continued the healing and regular osteopathy treatments with Anthony for most of that year.  Anthony could not believe Wow had survived such horrific injuries, and he attributed Wow’s calm reception to his manipulations to the wonderful relaxing sessions we had established.  Over time Wow fully recovered and went on to ride again and happily lead his herd for many years.

I took a massive leap of faith into the unknown and juggled my publishing career with years of courses, study, exams and monetary investment in zoopharmacognosy, kinesiology and healing. Sixteen years ago I took the leap to concentrate totally on my animal healing clinics. With so many people interested in animal healing and so many animals of all species needing healing I created the Diploma in Animal Healing in 2005 at the first animal healing training school in the country. Today we have over 700 graduate animal healers and many students currently studying with us from around the globe. I am so proud of my students and graduates who are helping animals and their carers everywhere.